Yours Sincerely, Ian Mc Loughlin
Posted by Sligo RSYM at 12:00 PM No comments:

Activity: A demonstration at a public and televised event (Eircom league of Ireland football game between Sligo Rovers and Shamrock Rovers) to increase support for a “No” vote to the upcoming referendum on the Lisbon Treaty as well as increasing awareness of Sligo RSYM among the people of Sligo.Political Analysis:The display was an overwhelming success and it would be hard to imagine a better reception than that which it got. 5 people were involved in the display along with several flags such as the starry plough, communist flag, erin go bragh flag and the tri-colour flanking the main “No To Lisbon” banner. During the display a man walked all the way around the ground to personally shake our hands for the effort involved and to congratulate us. He commented on how the banner could be clearly seen from the main stand and said he was trying to make banners himself and the standard of ours were superb.

Unfortunately, the management committee of the club took exception to the banner due to its political nature saying a football club is not a political organisation and demanded it be taken down[The banner was already displayed for the whole first half of the game]. We flatly refused their demand as the club has previously endorsed a local Fine Gael councillor canvassing during a game in the run up to the last election and we felt this was very hypocritical.

It was during this episode that a group of local Sligo fans who we don’t know personally and were aged roughly 25-30 rallied around us, defending our demonstration. This was very heartening to see. The group backed us completely and insisted we bring this to the attention of the media in the form of a complaint, to highlight the bias present within the football club where members of certain political parties with an open cheque book can score political points through our local club but when working class youths attempt a peaceful and inoffensive demonstration, attempts are made to crush it. It was excellent and totally in the spirit of the demonstration that people from the community joined our side in protest against this treaty.

After the game the banner was brought to the side of the field so that all the people present could see it up close as they left the stadium. We were also well aware where the television cameras were placed as we had researched this and placed the banner in an area where it would get optimum exposure. Being a member of sporting forums on the internet myself I noticed the stir the demonstration had caused with it being openly discussed among local fans, both young and old. The attempts of the committee to censor the demo backfired on them as this just added to the attention it received. The whole event was highly beneficial as the point, getting young people discussing the treaty, was achieved. Our 3 core members has now risen to 4, plus 2 additional lads determined to help us after last night in way they can. I am optimistic they will indeed join us permanently in the near future.

Other news:We have forged strong links with local independent socialist councillor and deputy mayor of Sligo Declan Bree. This man has over 30 years of experience behind him as a representative of the people of Sligo and Leitrim and will be a great asset to us as we have agreed to help each other in any future events we are involved in.We have also established links with the Connolly Forum, which is a local organisation designed to bring all socialists of different affiliations together to speak on common ground and arrange events together.I am in preliminary discussions with the Republican Network for Unity in Galway about getting involved with them also.In the previous two months members of Sligo RSYM have attended many events on the organisations behalf such as forums on the EU Treaty, Easter Commemorations, Sligo’s save our cancer services campaign as well as the May Day celebration in Sligo town. 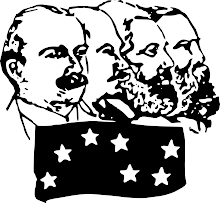